We've had a lot of sickness in our house this month.  We started out about 3 weeks ago with a stomach bug that caught Ellie first.  She stayed home from school for 2 days in order to get it through her system.  We were doing good for a couple days, then I got a stomach bug.  Yuck.  My bug just made me really nauseous, achy, and tired.  Not good for a mom.  The bug attacked Brad next.  He was house bound for a couple days because he was so sick.  Christian caught it last and threw up once.  Then a week later he threw up again.  Weird.  Ivan has been the only family member to escape the sickness.  Unfortunately, he is now dealing with a killer head cold.  All he wants to do is moan.  Despite the sickness, we have been able to have some bits of fun in between the bouts of sickness.

Brad took the kids sledding one Saturday afternoon after he got off of work.  We celebrated Grandpa Winter's birthday after sledding, and I was commissioned to make the cake for the celebration.  Ellie suggested we make a fishy cake to match the Christmas gift we gave Grandma and Grandpa.  I got a piping set for Christmas, so I got to test it out for the occasion.  I had a lot of fun, and I think the cake turned out really cool. 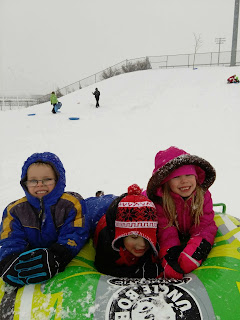 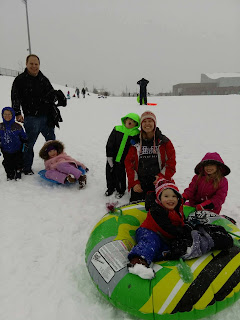 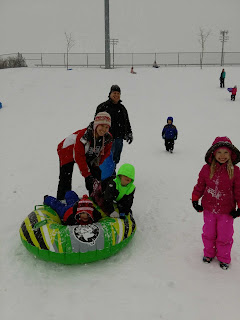 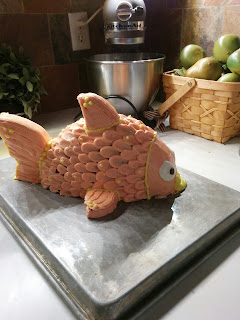 Brad and I have been married for about 7 1/2 years now.  From time to time we will bring up an activity that might be fun to do for a date night or for a family activity.  Often times, I will mention that I have done "such and such" activity in the past on a date before we were married.  Well, Brad has made it a goal that we replace all of these previous date experiences with our own rendition of the event.  With that in mind, I decided to get us Jazz tickets for a Christmas gift to check off one of those experiences.  We went on Friday night and had a lot of fun.  We even had great nose bleed seats to closely resemble my previous experience ;)  It was fun to get out and go to something a little different for a date rather than just go to dinner. 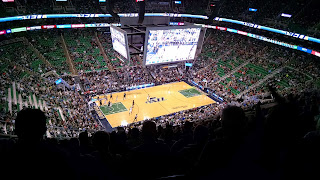 Last night I got to go to a play at the Terrace Plaza Playhouse with two cute little girls.  Ellie decided that she wanted to invite Ainsley to a musical for Ainsley's 6th birthday.  Ellie was invited to a play for her 5th birthday last year by her cousin Isaac, and she had so much fun, so she wanted to do the same activity for Ainsley.  We went and saw "You're a Good Man Charlie Brown."  It was a fun show for the girls to see especially since they have a little experience with the characters after having recently seen the new animated Peanuts movie.  My favorite part of the night was when Ainsley let out a huge laugh during Snoopy's suppertime song and the whole audience seem to laugh at her reaction.  It's not often that I get to have time with only these girls, so we had fun singing out girly songs in the car, exploring the theater, and creating some fun memories. 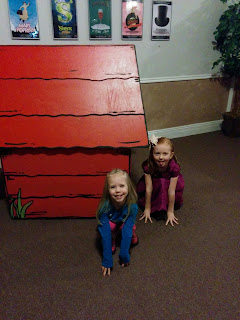 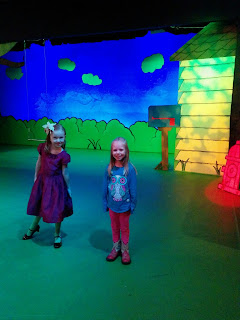 Here are some other pictures of all the fun we've been having in the snow.  We love have friends close by in our townhouse community.  Ellie Christian are outside multiple times in one day after a big snow. The snow plow has made a huge snow pile right by our drive way and all the kids have made it into a huge snow fort which also includes burrowing down in the bushes behind the snow pile.  They have made slides, snow chairs, and all sorts of pathways.  It reminds me of my own memories of playing in the snow when it was a kid.

Although we are all very excited to be coming back to Utah close to family and friends, it has also been a little hard.  We have made some amazing friends to whom it was not easy to say goodbye.

Well, we are back from our year long adventure in Oregon.  This experience has helped us all to grown and learn.  We will always look back to our time in the Willamette Valley with fond memories.  And we are now excited for the next stage in the grand adventure of life.

Posted by Brad, Teri, Ellie, Christian, and Ivan at 3:28 PM No comments:

Wow.  That went by fast.  We are gearing up to move back to the beehive state in less than a month, but we have had a fun filled Oregon May.
On Memorial Day,  Brad's co-resident, Ryan invited us to spend the day in the Springfield/Eugene area where he lives.  We visited the new home they just purchased, walked along the Willamette, and had lunch at a great restaurant on the U of O campus.  After, we drove to his family's property in Springfield.  Ryan's family has some beautiful property where they have a timber farm, cattle, and raise a few animals.  The kids had so much fun with all the animals.  After all the animal fun, we had a cookout.  It was all very beautiful and made us wonder why we are leaving Oregon. 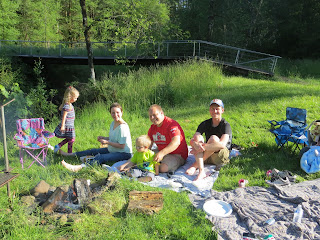 When we found out we were moving to Oregon, Brad got wind that the Spruce Goose resides in the state.  He wanted to make an effort to see it while we were here.  In honor of Brad and Christian's birthday, we decided to cross this off the Oregon bucket list last week.

However, the airplane festivities did not start in McMinville on Thursday when we had scheduled our trip to go see the monstrous wooden plane.  Because I have a reluctant napper in the house, I sometimes drive around Albany in the car with the kids in order to get Ivan to fall asleep.  We have a well established loop that I drive through the fields on the outer parts of town.  There are lots of sheep and beautiful green fields, so the drive is fun for the kids and relaxing for me.  Well, Wednesday we were out on our regular route when I saw a plane flying low to the ground up the road a way.  I decided to veer off our normal course and follow the plane assuming it was a crop duster hoping the kids would get to see it.  Well, they did, and it was quite a show!  The crop duster crossed the road just a head of our car at least two or three times and we got to see it release it "vitamin-a-mulch" (as Christian called it) as it dove down close to the ground.  Then right before it finished, it flew up parallel to the road really low to the ground right past our car and then flew up into the air and flew off.  It was so so so fun for the kids to see, and actually quite fun for me too.  It seemed like the pilot knew we were on the road just to see the plane, and he put on a show for us.  Boy, that really geared the kids up for our trip the next day.  They had a lot of fun telling Daddy about the plane when he got home from work.

As exciting as the crop duster was for us, we had a lot of fun at the Evergreen Air and Space Museum as well.  Out camera ran out of batteries before we got to the space building, so enjoy the planes.

April is full of fun for our family.  We have two birthdays in April to go along with Easter (most years) and the wonderful spring weather.  We celebrated one birthday yesterday, and are looking forward to the next birthday in another week.  We had a great Easter/Conference weekend as well, so we thought we'd share.

Christian is such a funny boy to have around.  He is very opinionated and doesn't back down easily.  He has learned well the meaning of time out, but doesn't really care. He loves to say "told ya so" when he knows the outcome of a situation.  He loves playing with his "site" trucks, making almost any object into a gun or spaceship, pretending to be a restaurant cooker, being a "bad guy", leading music,  and of course, he loves to bug his sister.  We love him and can't wait to see how he grows in the next year.
Posted by Brad, Teri, Ellie, Christian, and Ivan at 3:23 PM No comments:

What Teri would do with more time

Our Family and Friends